Deirdre Heekin and Eleanor Leger found each other through their love of the wild purity of fruit and botanicals. Orleans ciders are a unique and aromatic expression of the alpine Vermont landscape and a creation of two friends.

It was a snowy night at a hotel tavern in northern Vermont when Eleanor Leger and Deirdre Heekin met. Deirdre had just come out with her book Libation: A Bitter Alchemy, a collection of essays on wine and spirits. This was before the evolution of La garagista, when the idea of growing wine on Deirdre and her husband Caleb Barber’s hillside farm in Vermont was just a shadow at the edge of the imagination. There were some experimental vines planted at the homefarm in Barnard, but there was no inkling that Deirdre’s small, educational project would develop into the domaine it is today. In fact, it was unclear whether growing wine biodynamically at high altitude in this part of the world would work at all. Because Deirdre, a practicing sommelier at the time, wasn’t sure she could grow wines of place like she so loved to serve at the restaurant she and Caleb shared, all that interest got channeled elsewhere, to what she thought at the time were more probable and reasonable possibilities for farming and fermentation in this northern clime.? She had become enchanted by the world of infusions and macerations, amaro and rosolio.? This seemed like a way to make something spirituous in the hills of Vermont, an agricultural expression that could also represent a sense of place. In Libation she wrote extensively about her fledgling winegrowing and winemaking project, her fingers crossed, and also about her introduction to and immersion in rosolio and amaro during extended travels in Italy which provided endless inspiration for food, culture and spirit. 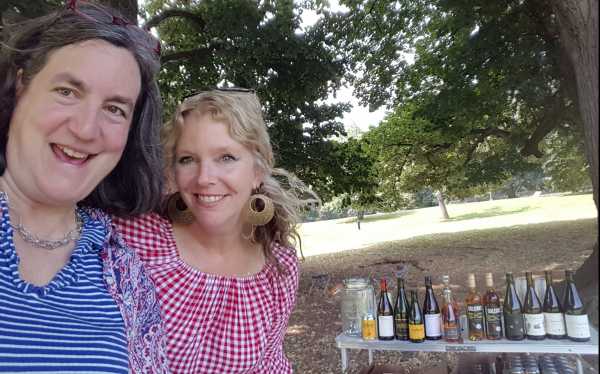 Meanwhile, Eleanor and her husband Albert had embarked on realizing their own dream of making top notch ice cider from their land in a Vermont so north it was almost in Quebec. Albert, a native Acadian, and Eleanor with a family history tracing to northern Vermont, chose this outpost to create an orchard and farm. They had been inspired by cideries in Normandy and knew that apples married very happily to the Vermont terroir. They wanted to work with the deep cold of snowy winters and began to riff off of the idea of ice cider. They named it Eden. When Deirdre and Eleanor met, Eden had had a couple of seasons under its belt and was refining the very particular process of letting cider freeze outdoors during the heart of the winter, then bringing that frozen juice into their cellar, drawing off the concentrated and condensed amber liquid to ferment into magical ciders. But like with all artisanal efforts, sometimes plans change, or life doesn’t go exactly as planned. One of the Eden tanks of cider decided it wanted to be something else. It fermented completely dry. At first Eleanor and Albert weren’t sure what that might be, until Eleanor met Deirdre and listened to her read about this world of elixirs infused with different herbs, flowers, fruits collected from the countryside. A lightening bolt struck in Eleanor’s vision and as they say, the rest is history.

The recipes are developed together by Deirdre and Eleanor, and the Eden team completes the circle of production up in their Newport, Vermont based cidery.